Have a look at the complete details of ideology of Pakistan according to Allama Iqbal in urdu. It was just through that Allahabad session that took place in the year of 1930 that this spirit and passion was inducted in the Muslims of sub continent to get a separate homeland. Here on this page, first we will telk about the definition of ideology and it is the science of ideas and it is the science of visionary speculations, this ideology is like the manner of thinking and it is also the characteristic and element of a class, it is all on the basis of factors linked with economic and social as well as political theory that any of the Ideology is based on! We know that our country which is Pakistan, it is an Ideological state and we got this country on the basis and factors of Islamic ideology. More of the information on ideology of Pakistan is share below.

Ideology Of Pakistan According To Allama Iqbal In Urdu

Regarding details of ideology of Pakistan according to Allama Iqbal, this great poet and thinker, Allama Iqbal has this believe that establishment and creation of Pakistan is a must! 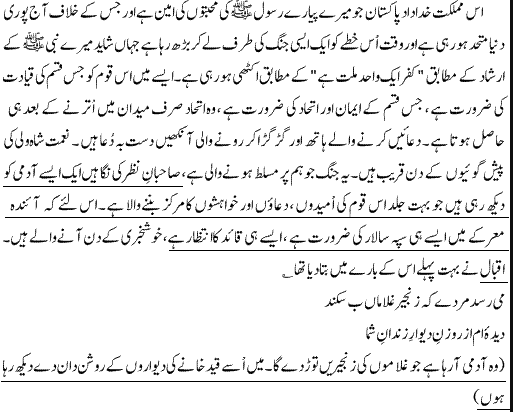 He has this utter and complete believe that muslims should get a separate state where they should be given this opportunity to live up their lives according to Sunnah and Quran faith. He pressurized on this point that Muslims of sub continent should get a separate and their own set of identity.

Allama Iqbal know that muslims of sub continent will get a separate state in near time. He had always put forward this point that muslims should be given this freedom to live their lives jus according to the Islamic rules and also Islamic principles . If one will know the real concept of Ideology then he or she knows that this concept of ideology is a kind of motivating force, this is the force that bring stability in any of the nation hood and it is because of ideological concept that Muslims of sub continent get their separate country in the form of Pakistan.

This is all clear cut details on ideology of Pakistan. Do also remember that Iqbal day is coming on 9th Nov 2017, so celebrate this day and give a huge tribute to Allama Iqbal efforts.